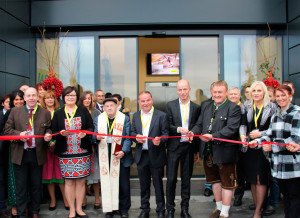 LASCO’s new 18,000 m2 operating site in Pöndorf was officially opened on October 23, 2016. The company, which is specialized in drying technology, hay technology, forestry technology and heating technology, has previously celebrated the 30-year anniversary of the company for two days with companions, traders and friends. On Sunday, 3500 visitors were not only responsible for sold-out hambles and burgers, but also for well-occupied company tours combined with great interest in the LASCO product range.
On Friday, the day before the open house day, we celebrated an unforgettable gala evening with representatives from politics and business. Also companions, traders as well as friends of the company were among the guests. The program included not only the official company blessing and the “cutting of the red ribbon”, but also an entertaining evening program. In addition to freshly cooked meat, fish and traditional “hay-milk cheeses”, national and international traders were honored for good cooperation and outstanding projects.

Video: This was our open house day and anniversary party (German)

Our video of LASCO’s travel in time is showing the most important milestones of the company’s 30-year history, and gave the starting shot for an interesting but funny panel discussion with the Landrichinger family.
A mentalist was following the main program and catered for a good mood and open mouths. He was able to elicit some secret from the guests. Johannes Landrichinger: “We once wanted to say thank you. Thank you for supporting our ideas, for the willingness to help, but also for the commitment and active collaboration.”. By this time our company employs more than 60 people and is due to its many innovations and product diversity extremely successful on the market.

We stopped counting an hour before the official end.

An event of a very special kind followed two days after. On Sunday, the whole company turned into an event ground. Products could be tested live and experienced in action. All visitors were able to convince themselves of the speed and precision of LASCO’s Hay Crane. The LASCO Cone Splitter impressed by its high splitting power and speed. Particularly popular for the guests were the chicken and burgers served. 1400 portions were sold out at about 15:00. The country women from Pöndorf reported 2200 farmers’ doughnuts and lots of lovely made cakes. The event was framed by the TMK-Pöndorf providing musical entertainment. The children’s area with bouncy castle, photo box and make-up station was very well attended.
LASCO provided 10 people just for guided company tours. Florian Gollob, Marketing Manager:
“Originally, we planned the tours with max. 10-15 guests. We wanted to show everyone in detail, how we operate and how we build our products. However, the big crowds made it necessary to increase the number of participants per tour to 50-60 people.” In total, around 1500 guests took part in a guided company tour.
The exhibition hall was well attended. The most important products in drying technology, hay technology, forestry technology and heating technology are presented here in a permanent and spectacular exhibition. The open house day went on until late hours in the night and was a huge success! We would like to take this opportunity to thank all participating guests, associations and staff. Interested groups can register for a visit throughout the year.

back to Home
back to News

Our latest feature for the LASCO hay crane is the integrated thermal imaging camera, which transmits the thermal image from the hay box to the hay crane cabin in real time….

END_OF_DOCUMENT_TOKEN_TO_BE_REPLACED

April 10, 2017, was dedicated to further education at LASCO. Around 40 customers visited our customer training this year. Thus, were perfectly prepared for the upcoming drying season. The chairman of the ARGE Heumilch, Karl Neuhofer, took the lead. He talked about the...

END_OF_DOCUMENT_TOKEN_TO_BE_REPLACED

Commissioning of LASCO’s Hay Crane M90 in a big hall

This year, the miscanthus specialist and energy plant pioneer Phillipe Colin from France has fulfilled his dream and raised his production and processing to a completely new level. For this purpose, a new hall had to be constructed. In that new hall, the Miscanthus...